Background: This study aimed to evaluate the effects of hydrophobic and hydrophilic Film-Forming Gels (FFGs) on the controlled delivery of drugs with different levels of hydrophobicity.

Methods: This evaluation was carried out by employing zein and polyvinylpyrrolidone as hydrophobic and hydrophilic film-forming agents, respectively, in combination with hydroxypropyl methylcellulose functionalized as a hydrogel basement at a ratio that had been optimized to achieve the fastest drying time. Free curcumin or terbinafine hydrochloride was subsequently dispersed into blank FFGs to produce the final FFG formulations.

Results: Although the extreme hydrophobicity of curcumin strongly limited its topical permeability compared to that of terbinafine hydrochloride, zein FFGs clearly resulted in a favourable sustained release system for highly hydrophobic drugs, such as curcumin. Moreover, polyvinylpyrrolidone would be highly effective for the sustained release of a less hydrophobic drug, such as terbinafine hydrochloride. Analyses of the wettability, surface morphology, chemical interactions and crystallinity of FFGs also helped to elucidate the mechanisms of their drug release profiles.

Conclusion: This fundamental finding is beneficial for further design studies on FFGs as sustained drug delivery systems for topical drugs with a wide range of hydrophobicities. 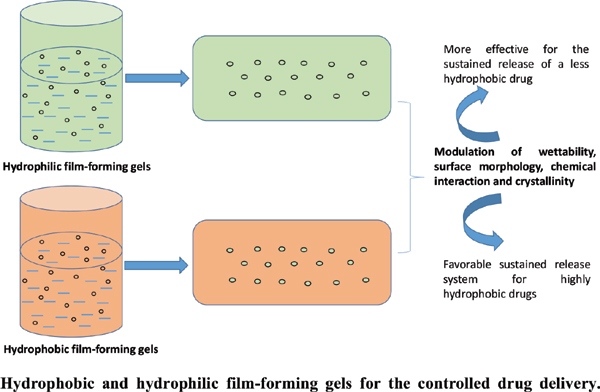