Epigenetic and miRNAs Dysregulation in Prostate Cancer: The role of Nutraceuticals


The control of cancer onset and progression is recognized to benefit from specific molecular targeting. MiRNAs are increasingly being implicated in prostate cancer, and the evidence suggests they are possible targets for molecular therapy and diagnosis. In cancer cells, growing attention has been dedicated to novel molecular mechanisms linking the epigenetic scenario to miRNA dysregulation. Currently, the rising evidence shows that nutritional and natural agents, the so-called nutraceuticals, could modulate miRNAs expression, and, as a consequence, might influence cellular responses in health or diseases conditions, including cancer. Among dietary components, plant-derived polyphenols are receiving wide interest, either for their anti-aging and anti-oxidant properties, or for their more general "cell-protective" effects. Above all, their role in preventing the occurrence/recurrence of cancer and, in particular, their potentiality in nutritional intervention for modulating the functions of miRNAs and the epigenetic mechanisms, is still under active debate.

This review is focused on the more recent highlights of the impact of miRNAs dysregulation on the onset and progression of prostate cancer, their interplay with epigenetic control and their modulation by natural agents. 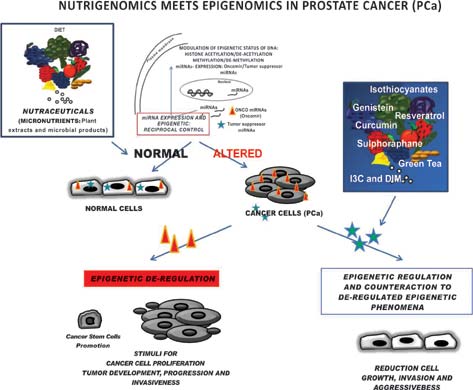